SHANGHAI — When award-winning Canadian-Chinese chef DeAille Tam went into the mountains of Yunnan to help pick highly prized matsutake mushrooms, she found more than the terroir — the flavors imparted by the local environment.

“It was the hardship,” she says. “I spent five hours walking and trying to find those mushrooms, with a group of women, all small so they could make their way through low bushes and brambles, up and down through the trenches. That gave me a new appreciation of what comes into a restaurant and left me with a new emotion.”

Along with her husband and co-chef Simon Wong, Tam traveled around China for more than a year after their work at restaurant Bo Shanghai ended in 2019 (for which Tam became the first woman in China to earn a Michelin star), and before founding Obscura, the cutting-edge Shanghai restaurant that helped her win the title of Best Female Chef in this year’s Asia’s 50 Best Restaurants awards.

Whether stopping in Changsha, Dali, Kaifeng or the famed porcelain center of Jingdezhen, she observes, “Many people think food is our only source of inspirations, but sometimes learning about local cultures and history can help strengthen our understanding … build bridges … as we reinterpret these cuisines in our own way.”

Tam is not alone in finding fresh creativity in China. Taiwanese-born Andre Chiang, who spent 15 years training in France before founding the acclaimed Restaurant Andre in Singapore, was also inspired to create his two latest ventures by returning to his Chinese roots. As he puts it, “Chinese cuisine is like an ancient Chinese poem. I wasn’t out to change it, but to translate it into a global language so everyone can see its beauty.” 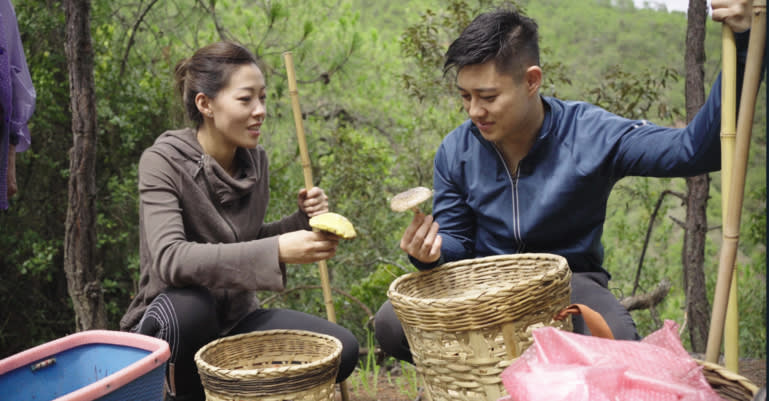 Top: Tam and her husband and co-chef Simon Wong hunt for prized matsutake mushrooms in the mountains of Yunnan, China. Bottom: The couple sought out local delicacies while exploring the country. (Courtesy of Shanghai DangDong Culture Media Studio)

For Tam, the quest for a new culinary language of her own was at the heart of her travels. “Culinary school sets the foundation, how to hold the knife, but it’s in the real world where you find how you want to express yourself,” she says. “And wherever I traveled, I wanted to find the things that … locals eat or grow in their backyard. Those are the treasures not discoverable on an internet search.”

Among these, she counts a type of larvae that feed on a soil fungus found amid bamboo forests. She also created one of her latest signature dishes, called “Three Whites,” after travels around Zhejiang Province led her to an aged scholar who told them how much he savored three kinds of fish (whitebait, small prawns and silverfish) culled from a nearby lake.

“I draw ideas from everywhere,” Tam explains. “Travels, childhood memories, and also the stories I collect, the feeling I got listening to this old man.” 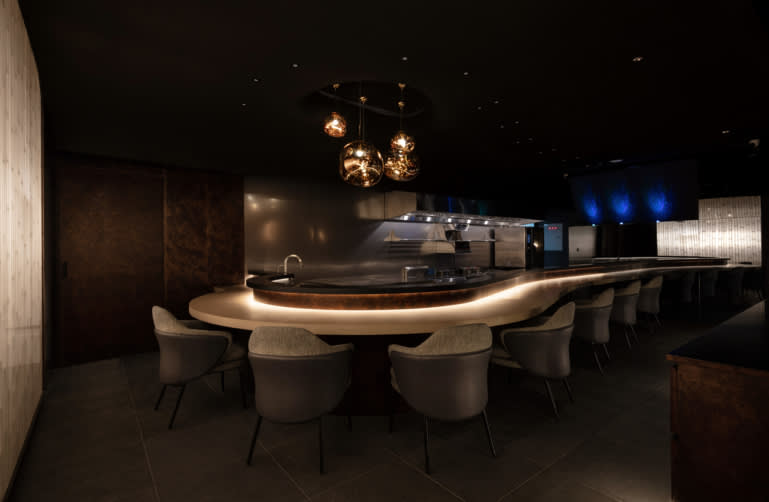 This deep connection to China is a key outcome of Tam’s road trip, which taught her, she says, that “sustainability isn’t just in terms of preserving the environment, but sustaining ways of living for the next generation.”

While Obscura draws on global influences, Tam says she is now conscious of the need to preserve each plate’s connection to its regional origins. One dish is based on a “Dragonwell Tea” that she stumbled on in Hangzhou, another on something she never expected to find in Chongqing — a Chinese version of sauerkraut. “I might play with techniques,” says Tam, “but I don’t put Guangdong and Shandong together. Traveling around, I saw how meticulous cooks were about spice profiles, that they could change a lot from town to town.”

None of this appears on any Obscura menu — because the restaurant does not provide a description of what will be served. “We really want diners to be surprised; to drop all expectations and labels and follow what their palates tell them,” Tam says. “This way they can see dishes they might never order in a new perspective and join the adventure.” 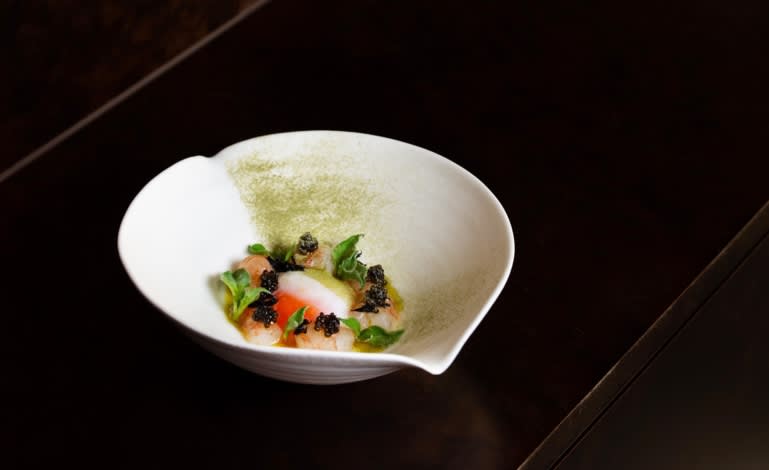 Chiang’s adventure had a more theoretical starting point. In a way, it was more of a return, since he had started out cooking Chinese food at 13 in a restaurant owned by his mother in Japan. Citing others who may have gone on a parallel journey, he mentions Vicky Cheng of Hong Kong’s Via Restaurant, another Canadian-born chef trained in French classics who now delves deeply into Chinese sources.

After closing the eponymous and high-end Andre and opening Raw in Taipei, Chiang explains, “I was drawn to Sichuan food because I love spicy food. Then I discovered that among the eight major schools of Chinese cooking, this is the only one that has an official, authoritative book, based on 10 years’ research, to document its 24 unique flavor combinations. It was fascinating to have this tangible profile of a cuisine and an analysis of what made it uniquely Sichuanese.”

Fortuitously, he was asked to launch a restaurant in Sichuan, in what he terms “a really one-of-a-kind” location atop the most ancient bridge in Chengdu, the provincial capital. Over a period of three years creating The Bridge, Chiang estimates that he traveled to China “at least 50 times.” He got to explore the province and sample ingredients, meeting up with numerous master chefs — including some who authored the manual that inspired him. Top: The Bridge, Chiang’s restaurant in Sichuan, sits atop the most ancient bridge in Chengdu, the provincial capital. Bottom: Before launching the restaurant, Chiang estimates that he traveled to China “at least 50 times” over a period of three years, exploring the province, sampling ingredients and meeting with master chefs. (Courtesy of stargourmet)

Of his adjustment to China, he observes, “In Taiwan, it seems, we evolve gradually, we stay in the middle. But in China you always see that contrast between the two extremes: richest and poorest, the oldest and the latest.” Even more so, he adds, “I was surprised how most Sichuan people, even in a big modern city, understand the seasons and remain attached to them. They know just when to eat what in each month, and for 2021, that’s a pretty cool thing.”

Still, it was a struggle to win local diners to his landmark spot, with foreign tourists forming the bulk of the initial clientele. “The food is contemporary but still very Sichuan, cooked by 35 Sichuan chefs,” he says — a bit modestly as the 33-page menu (and a set dinner of 25 treats that’s a mere $100) includes such Chiang-esque fusions as “octopus confit with artichokes” and “kung pao foie gras” (duck liver in place of chicken and edamame soybeans in place of peanuts for this classic dish).

“Chinese people had a tough time walking into a posh spot, and recognizing the food didn’t always have to be so hardcore, with numbing seasoning every time, or best found in some old place with flies all around,” Chiang says. 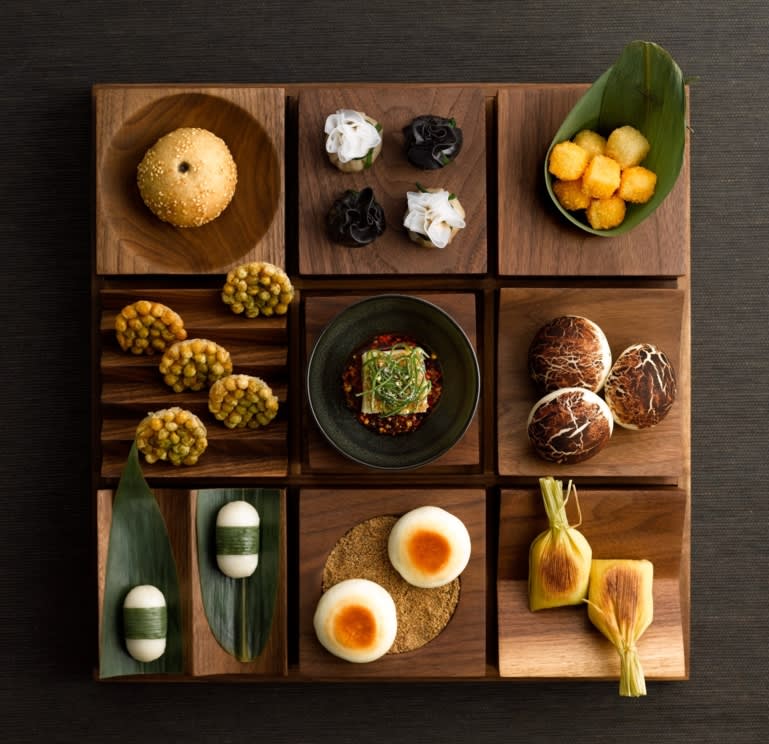 Taking his passion a step further, Chiang also created the lavish Sichuan Moon at Macao’s Wynn Palace hotel. “This was a dream come true because I wanted to take Sichuan cuisine hundreds of years back to a time when it was prestigious and luxurious, a kind of over-the-top palace cuisine instead of stir-fry on the street — from rustic arts and crafts, you might say, to the Renaissance.”

Classics like mapo tofu (bean curd drenched in spicy minced meat) and fish-flavored eggplant (actually a tangy garlic treatment with no fish) are transformed at Sichuan Moon into minimalist bites, surrounded with floral displays. While the menu changes, it holds to 24 courses, one each for all the essential combinations profiled in the book that launched his travels. Instead of “reaching through heaps of chilies to find bits of chicken,” he has attempted to package the same flavors as they “should look in 2021, not 1950. Instead of adding, to strip down to its contemporary essence.”

As Chiang insists, “China has great chefs already; it has great ingredients. But because the image of Chinese food outside China is completely different, we need a curator who can best present it — and take people through the experience just like they go through an exhibition.” Top: Chiang’s version of the Sichuan classic, mapo tofu. Bottom: Chiang, who says he has “retired” from day-to-day kitchen duties, talks to chefs at The Bridge. (Courtesy of stargourmet)

Declaring that he has “retired” from day-to-day kitchen duties, Chiang adds, “My ability is not so much to cook a fish or a chicken correctly but to see the philosophy and structure of a cuisine. To take the same bricks and cement, but be an architect making new houses and a way of living.”

In her own way, Tam is doing the same thing — and still makes time on weekends to explore new regions of China. Amid Obscura’s swirling curved counters, which make for a spectacular chef’s table each night, she and her husband also seem to be distilling and showcasing what the country has offered them.

“I’m proud to be Chinese, even though people in Canada, Hong Kong or China see me very differently,” the chef adds. “Some of those we met [on our travels] said we were too young, not native enough. But I’m very happy to be multidiverse, to be part of everything. As the saying goes, ‘The same rice can raise 100 kinds of people.'”