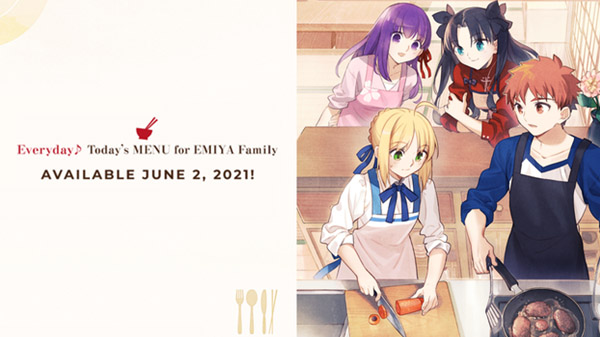 Everyday Today’s MENU for EMIYA Family will launch for Switch via the Nintendo eShop on June 2 in the west for $49.99, publisher Aniplex announced.

Here is an overview of the game, via its official website:

The video game adaptation of the deliciously heartwarming world of Today’s MENU for EMIYA Family is finally here!

Watch as Saber, Sakura, and Rin slice, stir-fry, bake, and deep-fry their way through a variety of delectable recipes!

What culinary delights will they grace us with next!?

Of course, the game wouldn’t be complete without everyone gathering together to enjoy these mouthwatering dishes!

The game features popular recipes from the original manga, along with a bevy of exclusive story content of its own!

Experience the blending of the Fate universe and the culinary world in this fun kitchen adventure!

A Servant contracted to Shirou. Saber lives at the Emiya residence.

Shirou Emiya’s classmate. Rin is the sixth-generation heir of the mage clan that manages Fuyuki City, the Tohsaka family. Her specialty is Chinese food.

Shirou’s junior who frequently visits the Emiya residence to learn to cook from Shirou, which has given her top-notch culinary skills. Her specialty is Western dishes.

A young apprentice mage who is good with his hands as well as being an expert at home cooking.

Not a day goes by that delicious food isn’t being prepared at the Emiya household.

Every day is a mouthwatering cooking adventure with the characters from Today’s MENU for EMIYA Family!

In addition to recipes from the manga and anime, Makoto Tadano, who served as the original work’s culinary supervisor, provided additional recipes exclusively for the game!

Play one of eight minigames where you’ll cut, grill, stir-fry, and more! Improve your cooking skills and receive top marks from Shirou!

Collect memorable photos and outfits by completing tasks every day. Each playable character has their own set of memories that can be collected.

Players can view snapshot photos and outfits obtained through the Story and Daily Menu modes here. Change into outfits you have obtained and enjoy taking photos.