Dallas-area Chinese restaurants are surviving the pandemic with takeout, safety and loyal customers

In October, New York-based cookbook author and self-described “stir-fry guru” Grace Young teamed up with the James Beard Foundation for an Instagram campaign to #SaveChineseRestaurants.

To explain the initiative, Young cites a Business Insider report that 233,000 Asian American businesses closed between February and April last year as the pandemic gripped the country. A report by NBC News found that before stay-at-home orders were implemented in March, businesses in historic Chinatowns like San Francisco and New York had already lost 70% of sales “due to anti-Asian bigotry, fears of the virus and a sharp drop in international tourism.”

“This is a crisis, and without steady patronage, these businesses will not survive,” Young wrote.

At Kirin Court, Jeng Chi, Monkey King Noodle Company, Royal China and Szechuan Chinese, the owners say to-go sales are booming and nearly make up for the loss of dine-in business, even with fewer people eating out and restrictions on capacity. And apart from a few accounts of guests leaving or becoming hostile over a mask requirement, owners say there have been no indications of xenophobia or racism in their restaurants.

Four of the five say that despite a drop at the beginning of the pandemic last year, they’ve resumed operating at 70% or more of their pre-COVID-19 sales, an encouraging fact as other decades-old institutions in the city shutter.

Andrew Chen, chef-owner of Monkey King Noodle Company, opened two new locations in 2020. “The fact that we’ve only lost 30% of sales while opening other markets is kind of miraculous,” he says.

Chen opened Monkey King branches in Lake Highlands in October and Richardson in December, and he has two more in the works, one at the AT&T Discovery District in downtown Dallas and another at the new Harvest Hall in Grapevine. He credits his success to branching out from the flagship Deep Ellum kitchen to family-centric suburbs, and to having a northern Chinese street food menu that was originally built for takeout in 2013.

Geography is a factor. Restaurants are spread throughout the Dallas area, unlike the concentrated, tourist-driven Chinatowns of other major U.S. cities. And there are other common factors contributing to the success of local Chinese restaurants. 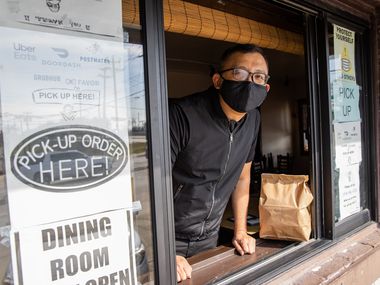 All five owners interviewed use third-party delivery services, such as Caviar, Grubhub and DoorDash. Chen says he was an early adopter of UberEats and Caviar, and that even though the fees are “rough,” the apps “keep the cash flow going. They keep the kitchen active.”

In addition to delivery apps, the other four owners use commission-free online ordering systems, like Chownow and Menufy, which launch from their restaurant’s home page.

Michael Chan, owner and general manager of Richardson’s 33-year-old dim sum destination, Kirin Court, says Menufy makes it convenient for customers to order from the 45-item menu. Such services allow for customers to pick up from the restaurant or pay full courier rates for delivery, with restaurants paying a flat-rate fee each month.

Despite Texas Gov. Greg Abbott allowing restaurants to re-open dining rooms on May 1, dozens of Chinese restaurants throughout D-FW remain closed for dine-in business. Others are implementing cleaning and safety precautions that go beyond state guidelines in order to build guests’ confidence and protect staff members.

Alice Wu, co-owner of 44-year-old Szechuan Chinese Restaurant on Lemmon Avenue in Dallas, says she hopes she won’t need to reopen for dine-in “until things seem a lot closer to normal.” Wu is operating at 80% to 85% of sales and sees the decision to remain closed as the “smarter choice” between losing a little bit of business versus losing a lot if she’s forced to quarantine her team. Aside from health risks involved to their families, she’s worried customers would assume the restaurant is permanently closed, or perhaps be skeptical of returning.

“Some customers are upset we haven’t reopened [for dine-in],” she says, “but I can’t compromise our staff and kids. It’s about safety, in general.” For now, it isn’t worth the risk, in her view. 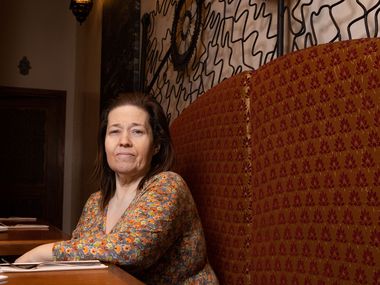 One of the city’s most popular spots for Chinese dining is the ornate Jeng Chi in the center of Richardson Terrace Shopping Center, D-FW’s closest thing to Chinatown. The institution started with Yuan and Mei Teng selling bao at a supermarket, and Jeng Chi has been serving an extensive menu of classic Chinese dumplings, noodles and teas since 1990.

The Tengs’ son, Francisco Teng, who is now co-owner with his wife, Janelle Teng, waited until after Mother’s Day to reopen their 5,000-square-foot dining room. Later in the year, they voluntarily closed two weeks before Christmas when they “cleaned the hell out of the kitchen” and hired a professional cleaning service to clean “floor to ceiling in the dining room,” Janelle Teng says. Rigorous sanitation continues three times a week with an electrostatic disinfecting routine.

In addition, hosts are prepared with disposable masks for customers who walk in without their own. After guests confirm they feel safe at a table, they are asked to keep their masks on while ordering from waitstaff, a precaution recommended by the federal Centers for Disease Control and Prevention.

“My hope is I’m building customers’ confidence by maintaining cleaning and safety. It’s really important to us,” Janelle Teng says. “We are a family-owned business. We still have seven people on the payroll who are family.”

Other restaurant owners, like Chan at Kirin Court, are using UV lights to sanitize surfaces at night, as well as hiring routine disinfection foggers three times a week. In addition, Royal China at Preston Royal installed $2,000 worth of HEPA air filters this summer after closing twice due to staff cases of COVID-19. Co-owner April Kao tells us no one has tested positive since. 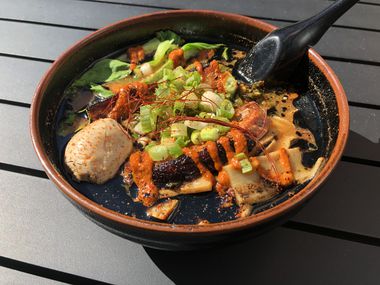 Dallas-based Facebook group Asian Grub in DFDUB — with more than 38,000 members — has been especially helpful to Asian-owned restaurants during the pandemic. Started by five University of Texas at Arlington alumni, the group had 18,000 followers when Dallas Observer’s Brian Reinhart first reported the group’s mission to save North Texas Asian restaurants.

Group founder Kimberly Le tells us that when the group of friends heard terms like “the Chinese virus” in the news and reports of empty Asian-owned businesses in Houston, they formed the group to prevent that xenophobia from affecting Dallas-area restaurants.

Vu Ly, another group founder, says the platform is his generation’s way of helping established mom-and-pop restaurants, as well as giving new restaurants exposure. “There’s hidden gems all over the city,” he says, and enthusiastic posts on the page frequently receive thousands of “likes.” 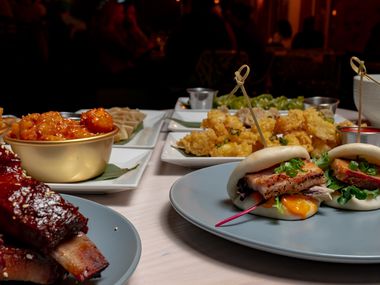 No matter what pivots owners make, they don’t mean anything without repeat, loyal customers. That is evident at the 47-year-old favorite for hand-pulled noodles, Royal China, which is open for dine-in.

Speaking of the restaurant business, owner April Kao says, “It’s always ups and downs, but never has it been like this before.”

Before COVID-19, two-thirds of sales were from dine-in and one-third from delivery. Now, it’s reversed, Kao says. In addition to increased to-go sales, she reports customers are tipping more and buying more gift cards, such as one customer who bought $5,000 worth of gift cards.

“We are fortunate we have so many supporters in the neighborhood,” she says. “There are many people who love us, and we are so grateful. We are so grateful to the friends we have made.”