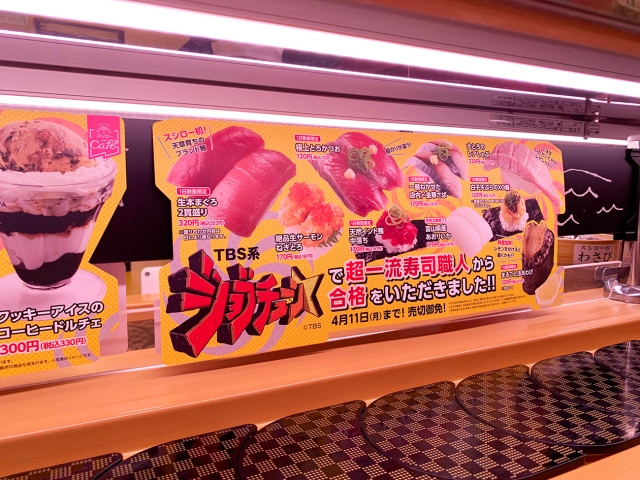 This is some of the finest sushi currently available at Sushiro…but some are limited-time-only!

Our Japanese-language reporter Seiji Nakazawa is a huge fan of kaitenzushi (conveyor belt sushi) restaurants. In fact, he’s been making it his mission to find out which restaurant serves the best kind of each sushi. He’s also been busy asking a kaitenzushi expert about the best ways to enjoy sushi. That’s why no one was surprised when, after popular Japanese television show Job Tune picked some of the best menu items at conveyer-belt sushi chain Sushiro, Seiji immediately went to test them out for himself.

Job Tune is a Japanese variety show that has a segment where a top-class food industry professional goes to a restaurant chain and judges the food there. Seiji, who doesn’t generally watch much TV (besides anime, of course) happened to catch the episode on Sushiro while in a sauna, and was immediately sucked in. That’s because it featured none other than tuna expert Masanori Yamagami, who is in charge of buying the tuna for Sushiro’s restaurants.

Yamagami selected an arrangement of the best sushi at Sushiro, so naturally Seiji had to go and order every kind. Sushiro also happened to have started it’s “Kodawari Ichioshi Neta Festival” on April 6, which offers a special menu of the restaurant’s top-recommended, finest quality sushi dishes, which was another incentive for Seiji to go (though, to be fair, he needs no extra encouragement).

Much of the sushi recommended by Yamagami on Job Tune was also included on the special Kodawari Ichioshi Neta Festival menu. The Job Tune recommendations were as follows:

(The sushi shown in the picture is not in order. Also, prices at Sushiro vary depending on the restaurant’s location, but the prices listed here are based on those found on the official website. Prices include tax.)

Altogether, there were 14 highly recommended sushi dishes for Seiji to try. Unfortunately, the Toyama Bigfin Reef Squid was out of stock, so he couldn’t try that, but Seiji had plenty to tantalize his taste buds in the meantime. In the end, he gorged on 13 different plates of sushi…

And ended up being quite full.

For many people, 13 plates is quite a lot. That was certainly true for Seiji. But even though he felt full to bursting, there were three dishes in particular that he just had to order another plate of, which were the following.

Osamu Shitara of the comedy duo Bananaman, who is also one of the regular panel members on Job Tune, said of the abalone, “It has a lot of crunch, but there’s also a softness to it,” and Seiji couldn’t help but agree. He had the impression that abalone is always crunchy, but while Sushiro’s Whole Fresh Abalone, which is sliced just prior to eating, also had a juicy deliciousness that exploded in his mouth. It was completely different from Sushiro’s regular abalone.

One thing Seiji was excited for was to see his abalone dance when he squeezed lemon over it. That’s what it did on the TV show, and even the menu warns that it might start moving with a drizzle of lemon.

Unfortunately, neither of the abalone sushi that Seiji received responded to the lemon juice, so Seiji wants to leave you with a warning that it may, in fact, not move when drizzled with lemon juice (even if you really wish it did).

In Japanese, Sushiro calls this dish “Shime Kinka Saba,” with the shime part referring to the pickling, and Seiji recalls the Job Tune crew talking about how much effort Sushiro puts into getting the process just right.

In the case of the Kinka Mackeral, it had a really excellent balance of umami brought about by the raw mackerel. Plus, compared to a lot of the other plates, which cost 330 yen, Seiji thought it was an extra bonus that this one was only 165 yen.

The specialists on Job Tune said this particular sushi dish is even better than it was before. Seiji found the salmon to be melt-in-your-mouth good.

Previously, our other Japanese-language reporter P.K. Sanjun tested out the salmon sushi at four of the most popular conveyer belt sushi chains and found none to be particularly better than the other, but Seiji thinks that if P.K. ate this salmon sushi, he’d probably change his mind. After all, it’s not just salmon, it’s top-quality salmon, minced with onions.

Those are Seiji’s top three dishes among those recommended by Job Tune, which he simply could not resist ordering again. However, just because there was a top three doesn’t mean the others were bad. No, he would honestly say that each of these dishes were well above the average of even Sushiro’s usual promotional menus.

If you want to try them, you should head over in next week or so. The Kodawari Ichioshi Neta Festival menu ends on April 11, and some of the Job Tune recommendations are included on that list. Some of the other dishes are menu constants, but most will be around only as supplies last.