This new Bluewaters restaurant offers food as amazing as its views


A new restaurant concept, SHÌ, has opened at Bluewaters Island and is serving up authentic and innovative Chinese cuisine with an amazing view of Ain Dubai.

As Ain Dubai, the world’s largest observation wheel towers above, guests can enjoy a sit-down dinner on SHÌ’s ground floor level interior or terrace or indulge in the fine-dining experience at the upstairs lounge, where a live DJ or violinist entertains with eclectic tunes.

SHÌ’s Chef Li Yuan Hui, who brings years of culinary expertise from Hakkasan Mumbai and Qatar has curated an expansive menu of authentic

The corner of Chestnut Street at the Chattanooga Green on downtown’s waterfront is teeming with life again since Agave & Rye opened in the old Blue Plate Diner location.

The restaurant, the 10th for the Kentucky-based chain, is big, loud, colorful and bold. It’s a place packed with Millennials, with a few Boomers here and there for good measure, this one included.

The base for most dishes is Mexican, but from there the menu puts a spin on several cultures, primarily Chinese. It’s a little offbeat, very interesting, even epic. “Epic,”you will discover, is the motto of everything at Agave & Rye, from the food to the atmosphere to the service.

In combining the foodways of different cultures, the menu might be described as fusion, the buzzword of the culinary world in the 1990s. Fusion, though, has given way to mashup, a term for the marriage of not 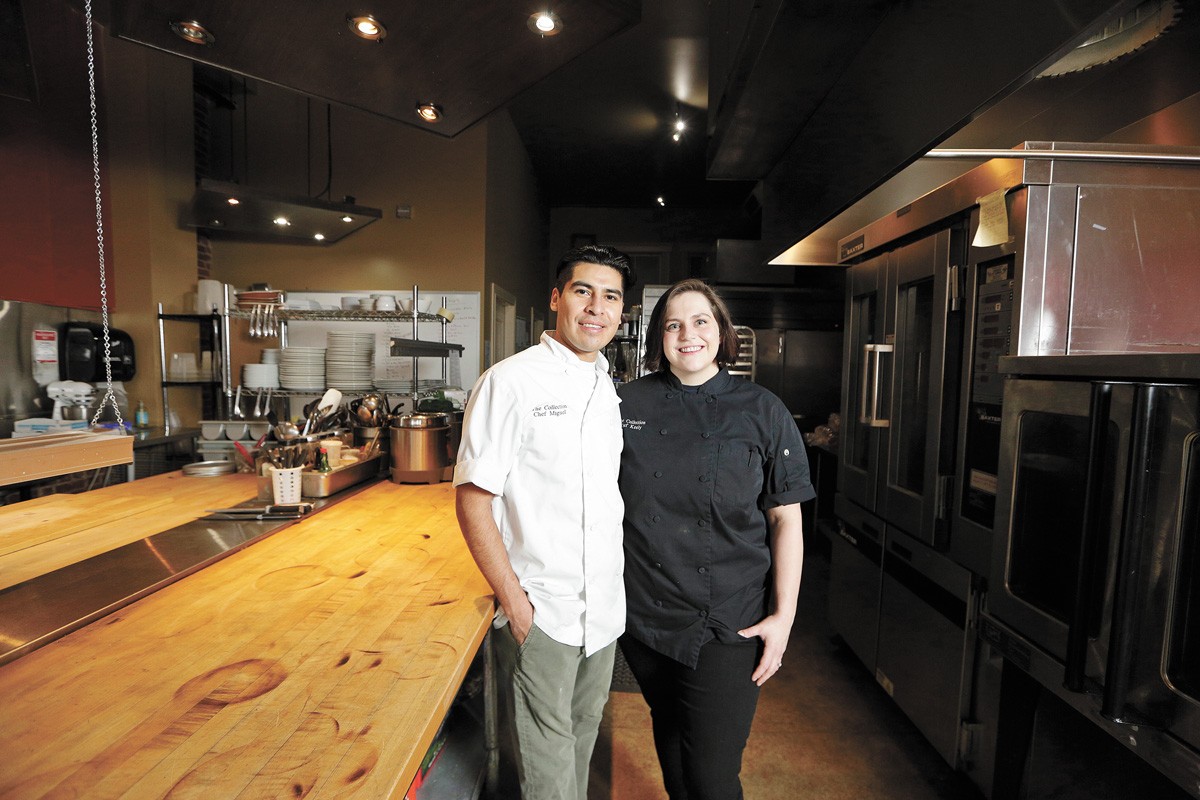 The Collection Bakery owners Miguel (left) and Keely Silva-Glenn at 180 Bar & Bistro where they use the kitchen to bake.

By marrying their individual cultures and years of baking experience in kitchens from New York City to Seattle, Keely and Miguel Silva-Glenn are bringing an eclectic mix of specialty pastries from around the world to Spokane.

The couple met eight years ago while working at a bakery in NYC and launched the Collection Bakery in summer 2020 after COVID-19 forced them both out of Seattle’s hospitality industry and to Spokane, Keely’s hometown.

The Collection’s current pastry lineup ranges from seasonal fruit tarts to traditional Mexican chocolate tortes and from layered Ukrainian honey cakes to babka — a sweet bread of Jewish origins. Each of these treats have a connection to the couple in some form. Miguel Silva-Glenn is from Mexico

ROCKY RIVER, Ohio — Go Buddha opened its food delivery service in Rocky River last July and is finding the city to be a friendly place. Maybe that’s because the chef really knows food –healthy food — and apparently that is being appreciated.

But now he is going even further, offering the Cleveland area’s very first ATM food service at the west-side restaurant. But let’s step back for a moment.

Chef and owner Joshua Ingraham and his wife, Emily, started the business in October 2019. Ingraham was the former executive chef for the Cleveland Indians and, prior to that, was the culinary director at the Cleveland Clinic.

“We started our restaurant as a sideline,” Ingraham said. “I always wanted to pair food and health. I had to learn plant-based food prep and wanted to go back to the root of simplicity in food. Whether vegan or not, we can all