Loro Gives A Master Class on Blending Asian and Barbecue

October 13, 2021
Bertie A. Kinser
Read Time : 11 Minutes
It’s a risky business these days to fuse styles of food. In these prickly times, what seems like the harmless blending of cooking techniques and styles can easily blow up. Make a misstep or show disrespect, and what used to be called “fusion cuisine” becomes “cultural appropriation.”

So, maybe it takes a lot of guts in 2021 to open up Loro, a place that calls itself an “Asian Smokehouse & Bar.” Borrowing flavors and styles from the East and Texas barbecue to create a menu? Texans don’t like being messed with, and that goes double when it comes to their barbecue. But perhaps the larger risk is seeing two white male chefs bring an “Asian Smokehouse” concept from Austin to Dallas. Recent history here shows how quickly tempers can flare.

Then there was Hot Joy’s brief tenure in Uptown four years ago. “Hot Joy is a clueless white-dude fantasy in which Asian identity and cuisine are reduced to a string of ironic clichés,” former Observer restaurant critic Brian Reinhart wrote of the kitschy spot in a review just before it closed.

Support the independent voice of Dallas and
help keep the future of Dallas Observer free.

How does Loro hope to navigate the minefield? With respect and loads of talent, that’s how. The duo behind this collaboration is Tyson Cole of Uchi and Aaron Franklin of Franklin’s Barbecue, each with a James Beard award on his resume.

One of the problems with Hot Joy was that the restaurant’s owner larded the decor with paper dragons, dragon masks, Tiki masks, lanterns, stone Buddhas and vaguely Chinese paintings, then offered food that was, to put it nicely, not good.

Exploring the question of whether white guys should borrow from other cultures, Reinhart mentioned Cole by name as someone who found ways to cook Asian food with respect and creativity. Cole’s passion for Japanese cuisine has been well-documented; in studying the food and the culture, Cole also learned the Japanese language and spent six years working at Musashino under the tutelage of chef-owner Take­hiko Fuse.

On the other side of the cultural divide, not many Texas barbecue fans are likely to take potshots at Franklin, who’s arguably the reason why Texas barbecue is so popular today. His eponymous barbecue trailer opened in 2009 and quickly earned a reputation for serving brisket equal to the best traditional joints in the state. Just 18 months later, Bon Appétit declared Franklin’s to be “the best BBQ in Texas, if not America,” spurring legions of pitmasters to start their own endeavors in Franklin’s new-old style.

Cooking across cultures requires a firm sense of responsibility, and Cole and Franklin have done the heavy lifting to master their respective cuisines. Their talent and experience allow them to play with the rules and, in Loro’s case, blend two styles of cooking in new and imaginative ways. The best way to avoid being painted as culturally insensitive is to not produce a lame finished product. The food at Loro soars.

“For a chef like me coming into this, we’re kind of still creating it as we go,” says Mike Perez, Loro’s chef de cuisine. “We’ve got this Central Texas/Czech-style post oak Aaron Franklin style barbecue, then we’ve got Tyson and Uchi, and the umami, the clean flavors, the light feel. So we’ll get that great smoked brisket or smoked turkey, for example, then we’re applying a lot of those clean, high-acidity flavors to cut the richness.”

That blending of styles on the menu also applies to Loro’s decor on Haskell Avenue, with both indoor and outdoor dining options that feel warm and inviting. Temperate weather brought out plenty of diners to Loro’s expansive patio on both of our visits, but inside is just as welcoming, with lots of honey-toned wood that evokes a minimalist Japanese style, shaped like a hall in a large barbecue joint.

For now, all of the ordering at Loro takes place inside at the bar; there is no table service. A member of the waitstaff will take your order and give you a number, and another staffer will bring your food. (You can eat at the bar, which makes it seem you’re getting regular table service and is a great way to interact with the helpful staff.) 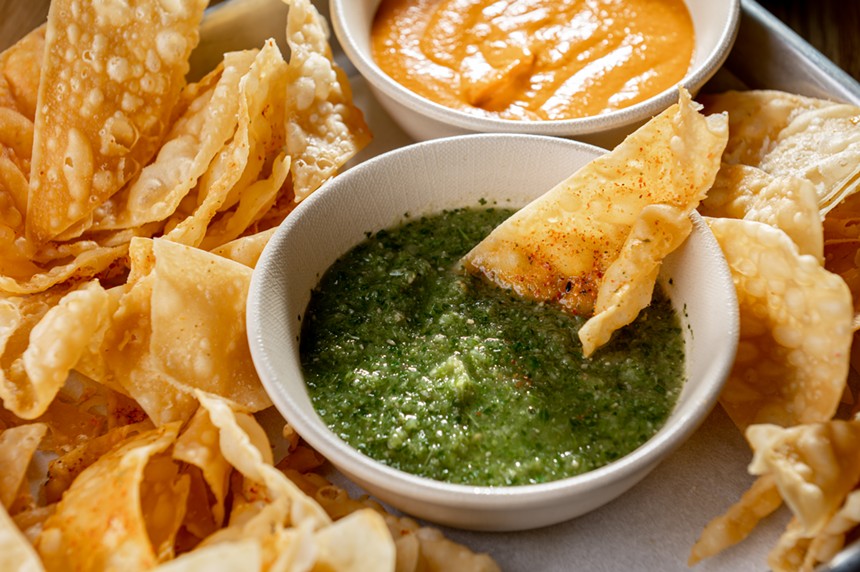 Wonton chips are served with a peanut sambal and a Thai green salsa.

Loro’s drink menu is impressive. There are a quartet of boozy slushes (our server let us sample a tasty mango sake slushy), a range of batch-made cocktails on tap and a draft beer list that leans heavily on Texas-based brewers.

On our initial visit, we took our server’s recommendation of wonton chips and dips ($6.25). The fried wontons are light and crispy, flecked with bits of red pepper that provide a light tingling after you’ve eaten a few of them. The peanut sambal sports a rich orange hue and a decadent peanut flavor, while the Thai green salsa is dominated by cilantro before bringing its own mild kick. Either sauce plays well with the slight heat from the wontons. We also thought we’d created a new dish by dipping a wonton in both the sambal and the salsa, but Perez tells us he does the same thing. Crunchy corn fritters have sweet whole kernels of corn and are served with a spicy a Sriracha aioli.

The crunchy corn fritters ($7.75) slide back to the smokehouse side of the menu. Whole kernels of corn occupy the deep-fried fritter and give a notable sweetness to each bite. Orders come with a Sriracha aioli that adds some cooling creaminess, but we wish they were a touch spicier. The same can be said for the chili aioli that accompanies the chicken karaage, which we tried on a second visit; we found ourselves hoping for more zing from the dipping sauce. Karaage is a Japanese style of deep frying, and it’s smartly executed here. Each bite wore a crispy, browned batter that shielded juicy chunks of chicken breast underneath.

Naturally, any restaurant that serves brisket and is associated with Aaron Franklin is going to invite comparisons to his barbecue joint in Austin. While this may not be the same brisket you’d get after standing in line for hours at Franklin’s in Austin, Loro still makes good on the promise of brisket greatness. The pile of brisket slices — you’ve no option of lean or moist —  are impossibly tender with exquisite beefiness. Consider your knife a decorative accessory. The brisket comes piled onto a plate and topped with pickled onion, Thai basil and cilantro, then drizzled with a subtle chili gastrique that allows the brisket flavor to shine.

The smoked turkey is served with an apricot chutney and crisped checked skin.

We enjoyed the turkey breast ($14.50), which was perfectly moist and smoky. The dish gets a bump from a slightly sweet apricot chutney and crispy slices of chicken skin served alongside, making for an interesting textural addition.

Want something other than Texas barbecue? Loro has you covered while still representing its smokehouse roots. The smoked salmon ($18) comes as a healthy fillet served in a bowl with a cucumber-yuzu broth. The fish was almost perfectly cooked (one edge seemed to be a touch overdone if we’re going to niggle), and the smoke flavor lingered just in the background without overpowering the fish.

If we ordered the salmon again, we might have it one of Loro’s rice bowls. The coconut-scented rice has just a touch of citrus brightness that pops against the salmon. We also ordered a Malaysian curried chicken rice bowl ($13.75), which arrived decorated with bright yellow curried chicken and an assortment of pickled vegetables that made for the perfect meal, light yet filling. A sesame oil dressing accompanies the bowl, but we felt it muted the bright flavors if applied too heavily.

Service is a high point if you sit at the bar, but even stepping up to the bar to place an order is a friendly and speedy process. The staffers we dealt with were knowledgeable and friendly. When we placed an order at the bar then grabbed a table outside, the server who brought our dishes explained the key components of each dish. We did have one glitch in service on our second visit when two of us ordered a shared appetizer and two entrees. The appetizer and one entree came to our table shortly after we sat down, but several more minutes passed before our second entree appeared.

These are minor hiccups that didn’t detract from the Loro experience. Chef Perez tells us that dinner service is thriving, and they’re working on getting diners in for lunch. He says menu items unique to Loro’s Dallas location are forthcoming, as are happy hour specials to encourage early arrivals.

Loro isn’t the neotraditional Japanese brilliance of Uchi, nor is it the benchmark barbecue excellence of Franklin’s. What Loro does with aplomb is blend pan-Asian influences with Central Texas-style barbecue, without the budget-busting price of Uchi or the hours-long wait of Franklin’s. Most important, Loro’s combination of resplendent fare and a beautiful venue shows respect — for the food, for diners and for the cultures that inspire it.