Food packaging is something that we don’t normally pay attention to, but Japanese paper craft artist Harukiru manages to repurpose them into stellar sculptures. Harukiru’s craft is the epitome of the proverb “one man’s trash is another man’s treasure”, taking the act of upcycling to the next level. Harukiru’s craft even impressed Nissin as the social media team of their cup noodle division featured his paper sculptures in a promotional tweet. The tweet promoted their new flavours as different sentai superheroes battling it out for first place in terms of sales. Nissin then followed up a week later to announce the flavour that won – Cup Noodle & Shio.

Harukiru’s most striking masterpiece would be the one that he made out of Pringles cans, giving us a glimpse of what the iconic mascot would look like if he had a body. Harukiru uses every part of the Pringles can to make each figure, including the lid that’s upcycled to become the figures’ stands. The red paper seal that’s normally tossed away upon opening is also fashioned into sleek vests for the Pringles gentlemen.

You can watch his full process of creating the Pringles figures here: 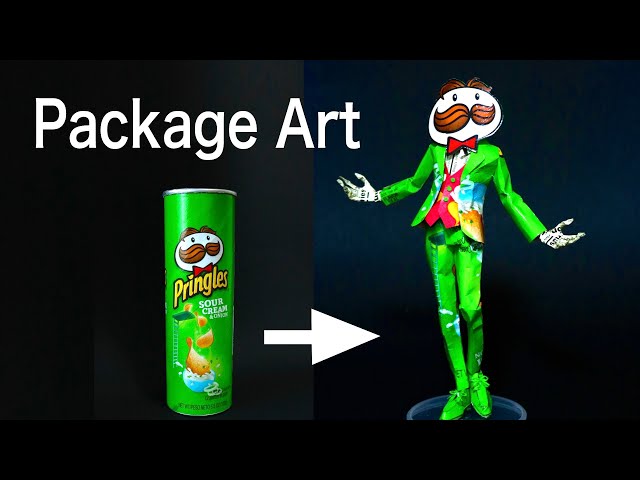 Besides creating figures, Harukiru can also make part of a town with detailed shophouses using the packaging of the popular Japanese chocolate brand Charlotte. Making use of the different illustrations of colourful houses on the boxes, Harukiru arranges them to represent various shophouses in a quaint town. He even utilised cutouts of the human and animal illustrations to make the town more dynamic.

Harukiru’s paper craft expertise is an inspiration to us all, giving new purpose to often discarded food packaging and gaining much recognition from it. He held an exhibition back in 2019 and recently in December 2021 to showcase his amazing work.