For My Family, This Passover Staple Is Year-Round Comfort Food

My mom’s matzo ball soup means so many different things to me. When I was growing up, she made it whenever I felt under the weather. She served it for family weeknight dinners. And she always cooked it during Passover. It was both her signature dish and my ultimate comfort food, accompanying all kinds of occasions, from the celebratory to the mundane.

Traditionally, matzo ball soup was a Passover meal, consumed in remembrance of the unleavened bread that Jews ate when they were fleeing Egypt. During Passover, Jewish people would buy Matzo bread from their local bakery and use day-old leftover crumbs to make the balls. In the U.S., when the Manischewitz Company began mass-producing matzo in the late 19th century, the ingredient became widely available and grew into a Jewish household staple. The Manischewitz Company dubbed their packaged product “Alsatian feathery balls.” It wasn’t until later that people started referring to the food as matzo balls.

In many ways, the evolution of matzo ball soup over the decades mirrors the long and winding journey of Jewish people to America. Today, matzo ball soup is a soul-soothing, belly-warming everyday meal that both Jews and non-Jewish people enjoy all year round. The dish’s ability to transcend the holiday is amazing to me because it shows how foods can have broad cultural meaning to people from all walks of life.

So, when I opened my restaurant Edith’s Eatery & Grocery in Brooklyn, serving my interpretations of staple Jewish dishes, it was obvious matzo ball soup needed a place on the menu—and I knew I wanted to honor my mom’s rendition of the dish.

What is really unique about my mom’s recipe is how vegetable-driven it is. She includes a lot of parsnips to really infuse the soup with the root vegetable’s sweetness. The traditional method involves putting all the ingredients in the pot and letting everything simmer, but my mom actually roasts the chicken separately before boiling the meat and bones; the trip through the oven allows the meat to enrich the soup with even more depth of flavor.

Of course, this dish wouldn’t earn its name without lovely, tender matzo balls. There are so many different ways to make them, and everybody puts their own unique spin on it. Do you go with a single big matzo ball? Do you make a bunch of smaller ones? Most classic Jewish delis in New York City serve a single giant matzo ball, but at Edith’s, we make smaller two-bite balls that are studded throughout the soup because we want people to enjoy a little bit of matzo in every spoonful. Some people even add ingredients like seltzer water to give the matzo balls airiness and ensure they don’t get too dense. When she makes them, my mom always uses schmaltz, which makes the matzo balls rich and aromatic. (Schmaltz really makes everything better.) The soup is served consommé-style, so the broth is ultra-clear—and very flavorful from hours of simmering.

My mom’s recipe for matzo ball soup is non-traditional in many ways—another reminder of how the dish has evolved over time alongside the people cooking it. It is anchored in Jewish custom, yet reimagined and tweaked so all the flavors really shine. And now, I get to serve this Passover staple—and share my mom’s cooking—every day of the year.

As told to Megan Zhang 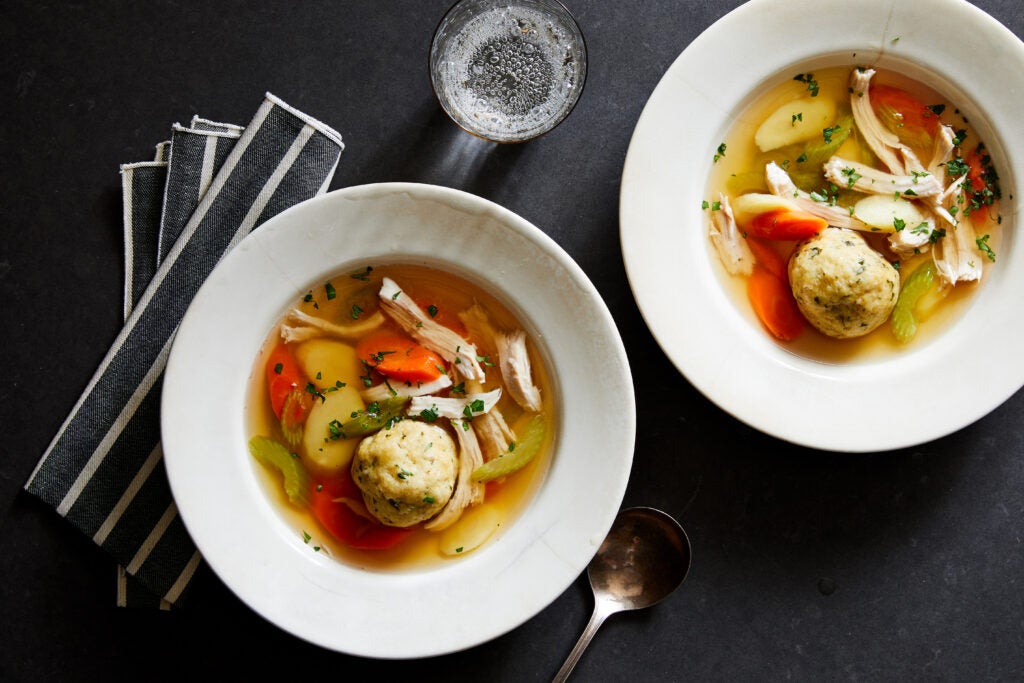