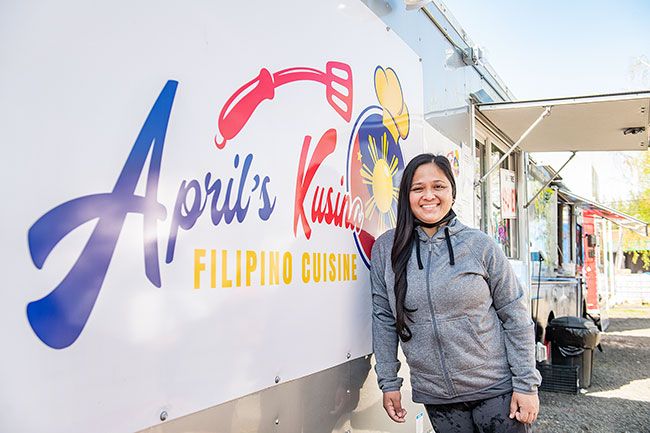 If April Smithburg were still living in the Philippines, she wouldn’t be doing much cooking.

In her homeland, men traditionally are the cooks. Women keep house, watch the children and do other tasks.

But April met an American man, Josh Smithburg, on Facebook; fell in love, and moved to Oregon to marry him in 2014. She began preparing the Filipino favorites she’d watched her father and brother cook at home.

Her specialties include lumpia, the Filipino version of a spring roll.

She began selling the rolls, which are filled with ground meat, vegetables or shrimp, and soon was attracting customers from all over Yamhill County. They liked the lumpia so much, they were willing to drive to her home in Willamina to pick them up.

“Why not try a food truck?” her husband asked.

He helped her obtain a shiny silver truck and set it up late last summer in the food cart pod next to Grocery Outlet on Highway 99W in McMinnville.

The owners of Kate’s Thai Cuisine, a popular McMinnville food truck that’s located at 12th and Adams streets, have served as mentors.

“I love Kate’s fried rice,” April said. “It reminds me of home.”

April’s Kusina, marked by a bright yellow, red and blue sign, is open 11 a.m. to 7 p.m. Tuesdays through Saturdays. Business has been brisk, the Smithburgs said.

April is joined in the cart by her sister, Precious Gould, who moved to the U.S. to marry one of Josh’s coworkers at the Sheridan Correctional Institution.

While they skip some ingredients Americans might not like, such as fish sauce, they serve up a variety of dishes that are popular in their hometown of Zambales in the Northern Philippines: chicken or pork adobo, pancit, grilled pork skewers, fried rice and other traditional foods.

Adobo is meat cooked for a long period in a mixture of vinegar, garlic and Filipino soy sauce. Like other entrees, it comes with rice, something Filipinos eat every day.

Filipinos also eat a traditional pastry at breakfast time, pan de sal. April plans to add that to the menu, along with more desserts and soups, as well.

When she moved to the U.S., she was surprised by how little rice Americans eat and how much they favor bread and potatoes. She prefers rice.

Other cultural differences she noticed was that the U.S. is less religious than The Philippines, where people in the north are largely Catholic and those in the south are Muslim.

Perhaps the most popular items on the menu are April’s famous lumpia, which can be purchased separately or come with full dinners.

She makes the rolls by hand, grinding the meat, mixing it with vegetables and rolling it in thin wrappers before frying. It’s labor-intensive; making a lot hurts her back, she said, joking about the pains of getting older.

In addition to making food from scratch and running April’s Kusina, she spends time with her three children, a girl who’s nearly 7 and boys aged 5 and 2.

“They eat American food. They love bread,” she noted.

April also spends time gardening, growing vegetables such as eggplants and Asian long beans. She loved gardening even before she learned to cook, she said. She grew up helping her mother plant and harvest.

She and her husband also are involved with the American Legion Riders motorcycle organization at Willamina Post 4211.

It’s a busy life, but she loves it, she said. Especially when diners try Filipino food for the first time and say they like it, and when they return to April’s Kusina.

The menu lists several hamburgers, burritos, tacos and quesadillas, and Filipino adobo and other meat and vegetable dishes served with rice or noodles. Lumpia also are available on the side or with entrees.